“Burckhardt demonstrates impressive technique, musical imagination, arranging ability, and a relentless sense of swing on this top-notch outing.” ~ Kevin Toelle wrote in the Illinois Entertainer about Sam Burckhardt’s CD, “A Walk In Time.” 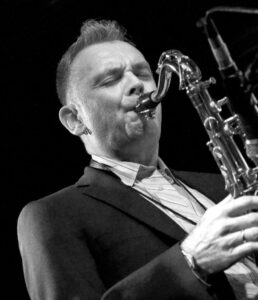 Born in Switzerland in 1957, Sam started playing the drums when he was ten years old.  He played his first gig with noted Blues pianist Eddie Boyd at the age of fourteen.  Several years later, he picked-up the saxophone in order to play in his brother’s band.  In April of 1975, he met Sunnyland Slim, the legendary Chicago Blues musician, and had the chance to accompany him at two concerts.  Fifteen years later, Sam and Sunnyland produced a CD of a tape of their first meeting, which is available on Airway Records (4757), entitled “Sunnyland Slim, Live in Europe, 1975.”

In 1982, Sam came to Chicago at Sunnyland’s invitation and has played in his band until Sunnyland’s death in March, 1995.  He recorded and produced an album with Sunnyland and his band (available on Evidence Records “The Sunnyland Slim Blues Band – Chicago Jump”) in 1985.  Over the years, he has performed or recorded with some of Chicago’s finest musicians, such as Hubert Sumlin, Johnny Littlejohn, Big Jay McNeely, Joe Houston, Steve Freund, Robert Stroger, Robert Covington, Pinetop Perkins, Erwin Helfer, Floyd McDaniel, Jimmy Rogers, Louis and Dave Myers, Fred Below, Smokey Smothers, Zora Young and Big Time Sarah.  Sunnyland and his band have performed at the Chicago Blues and the Chicago Jazz Festival, and other major festivals in the United States.  In 1992, Sunnyland’s band, Steve Freund, Robert Stroger, the late Robert Covington, and Sam, started performing under the name “The Big Four” and toured Europe on a regular basis.  They recorded a CD in Germany, which was released in 1994.

While on tour in Germany with “The Big Four”, a newspaper critic said of Sam’s playing: “His warm earthy tone and rich intonation set the highlights of the evening.  With his rendition of the old Ellington standard “Things Ain’t What They Used To Be” he proved that he would have fit perfectly well into Duke’s band.”

At the end of 1994, Sam went on tour in Japan with the late Floyd McDaniel, Yoko Noge, and Clark Dean. The same year, Sam helped start “The Mighty Blue Kings,” a group of seven musicians that quickly gained popularity.  Through their regular performance at the Green Mill on Tuesday nights, they established a large following.  Over 3,000 people attended the release party for their debut CD in 1996, “Meet Me In Uptown.”  Over 70,000 copies of their CD have been sold. In September of 1996, he left “The Mighty Blue Kings.”  He helped form a ten-piece Jump-Swing band, “The Big Swing.”  He performed with this band regularly in the Chicago land area. In fall of 1998, he organized a successful tour with “The Big Swing,” which took the band to Germany, Switzerland and Belgium. In 1999, he organized his own band, the Sam Burckhardt Combo. Sam is regularly playing with his combo at many of the best-known Chicago Jazz Clubs. In the last years, he has toured Europe twice a year, often appearing on Festivals in Switzerland. In 2008, he was the recipient of the Swiss Blues Award.

His critically acclaimed CD “Chicago Swing” on Airway Records (4758), containing all original compositions, was released in September 1999.  Lloyd Sachs in the Chicago Sun-Times called it “the best neo-swing album to reach these ears,” and ranked it number 5 of his top ten Chicago albums of 1999.  Kevin Toelle in the Illinois Entertainer wrote: “Skillfully produced and creatively arranged, “Chicago Swing” might just be the best local effort (in any genre) to appear this year.”  His second CD, “A Walk In Time,” was released in spring of 2002 and received three out of four stars from the Chicago Sun-Times. In 2003, he recorded a CD with Dan Nimmer, piano (presently with Wynton Marsalis) and Jake Vinsel.

In 2002, he started cooperating with Swiss organist Stephan Grieder, in what has become a yearly concert that includes music from the Baroque, to original compositions, as well as freely improvised pieces of music. In 2005, Sam had the opportunity to play in the National Cathedral in Washington D.C. with organist Erik Suter. A CD with Stephan Grieder, entitled “Nachtwandler,” was released in 2007 (Airway Records 4764). In the summer of 2009, Stephan and Sam toured the USA, together. Among the events was a very successful appearance at Chicago’s Rush Hour Concerts Series. 2006 has brought about a reunion of Bob Stroger, Steve Freund, and Sam in the recording of a new CD under Bob Stroger’s name, “Bob Is Back In Town” Airway Records 4762. The album features many original songs by Bob and horn arrangements by Sam. A CD entitled “Sunnyland” with Zora Young and Hubert Sumlin, Airway Records 4762, was released in March 2009, and has received critical acclaim. Sam and his Nonet played the last concert of the 2009 SummerDance series to a full dance floor. He is currently working in and around Chicago with Dave Downer’s Rhythm Rockets.

“Bobolink,” the 10th CD on his Airway Records label, features two different bands with all original compositions. It was released in fall 2011.

In April 2015, Sam was asked to play at the Blues Festival Basel. The same evening featured 90 year old singer and dancer Othella Dallas who was a student of the great Katherine Dunham, and a member of the Duke Ellington Orchestra in 1959/60. At the end of her set, she asked Sam on stage to play the last numbers with her. “Duets” which came out early in 2015 includes two sessions, one with Pianist Oliver Friedli, and one with all original compositions with bassist Jake Vinsel. “Fly Over,” a swinging affair with ace guitarist Joel Paterson, Pete Benson on Hammond B-3 and piano, Beau Sample on Bass, and Alex Hall on drums was released in August 2015.

In 2016, Sam was nominated for the Swiss Jazz Award and was among the three finalists to play at the Ascona Jazz Festival. Last year, Airway Records released a CD with Oscar Wilson and the same band as on “Fly Over,” entitled “One Room Blues” which received critical acclaim. The same year, Sam performed with Lucas Montagnier and his band in Paris.

2018 finds him back in Paris with Lucas Montagnier with whom he recorded a new CD in December. Early in 2019 their CD “Sam Burckhardt/Lucas Montagnier” is released on Airway Records. In April of 2019, he joined Maria Muldaur and band at the Blues Festival Basel.

Due to the Corona Virus, all scheduled spring events for 2020 were canceled, but Sam was able to perform at several venues in Switzerland in November. He took advantage of the hiatus to write a composition for piano and saxophone in five movements, entitled “19 Corvids.” A recording of the work is planned for 2021.